SHARE
Tweet
Getting the most out of macroalgae
Agnes Mols Mortensen, who started TARI – Faroe Seaweed along with her brother, is not only riding the wave of seaweed use in the Nordics, but looking to drive it as well.

Her passion for reaping the many potential benefits of seaweed began in the early 2000s with her studies in biology focussing on macroalgae from a biodiversity and taxonomic perspective. Upon finishing her master’s thesis from the University of Copenhagen, Agnes returned to the Faroes to experiment with seaweed cultivation and to discover a growing curiosity in seaweed. She found herself being invited to teach and speak on the subject as people wanted to know how they could eat seaweed and what exactly it could be used for. In response to the growing public interest as well as a recognition that these organisms were “interesting beyond just the biology”, TARI was born, initially with a focus on consulting and teaching. Still, Agnes and her brother continued to experiment with different species and cultivation techniques, and to explore the benefits of an integrated multi-trophic aquaculture (IMTA) approach.


“We are trying to invent a market, and that market is moving. So, we need to have a feel for where the market is going and also how we can influence that market.”


After venturing abroad to pursue her PhD at the University of New Hampshire, Agnes retuned once again to the Faroes. This time a buzz had developed around the use of macroalgae for biofuels, as an accumulator for CO2 in the oceans, and its many other beneficial properties. At the same time the culinary environment in the Faroes was flourishing, and there was a particular interest in seaweed products. Faced with an inspiring combination of opportunities, from environmental to gastronomic, the commercial potential of developing seaweed products, as well as Agnes’ experience as a researcher and consultant with Fiskaaling (Aquaculture Research Station of the Faroes), TARI grew from being a small initiative responding to public curiosity, to a player in its own right. TARI is now a macroalgal production company, founded on biological sustainability, and aims to develop the entire production chain, from spore to finished product, in the Faroe Islands. As Agnes points out, “We are trying to invent a market, and that market is moving. So, we need to have a feel for where the market is going and also how we can influence that market.” 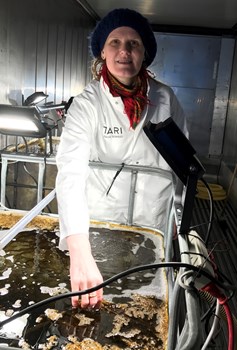 “A lot of people are interested in producing snacks and food with added value and seaweed is a natural choice."


Currently, TARI cultivates and harvests seaweed for production of dried products that are sold to a variety of cafes and restaurants across the Nordic region. These products are sold as gourmet snacks, but are also being incorporated as ingredients in the dishes and products being prepared. As such, seaweed is reaching an ever-growing clientele and audience.

In the long-run, however, TARI’s goal is to further develop seaweed products that take advantage of the full spectra of potential benefits, ranging from snack and food products, to health supplements for human consumption, as well as feed ingredients for salmon aquaculture, and extracting high value compounds from the biomass. “A lot of people are interested in producing snacks and food with added value,” explains Agnes, “and seaweed is a natural choice these days to add flavour as well as to be able to brand a food item as being healthy and of good quality.”

However, as popular and exotic as seaweed snacks may be, TARI recognises the potential for developing food supplements with high nutritional value and the capacity to improve gut flora due to the fibre content and bioactive compounds present in the seaweed. In the search for a food supplement that is pure in content as well as palatable to the public, they are currently working to find the right balance of macroalgae species ingredients to do just that.

Similarly, they have reason to believe that incorporating seaweed into salmon feed can improve the intestinal health and gut flora of the salmon, enabling better growth and development of the salmon. As Agnes emphasises, “For us it is also very important that if we sell for food and feed that we take care to maintain a good value of the seaweed so that we don’t take a really nice raw material and process it beyond recognition. We want to take a raw material and process it in a way that maintains its quality.” Expanding into these new markets and following a diverse range of opportunities, though, requires a building of knowledge both from a commercialisation perspective as well as a scientific one. “This is why we are so interested in being partners in projects with SUREAQUA," says Agnes. "Both to get more knowledge as well as ideas, and to meet other people, companies, and researchers. If we get to work with some of our ideas and get them tested then this could open up a whole lot of doors for us in the future.”

“For us it is very important that if we sell for food and feed that we take care to maintain a good value of the seaweed so that we don’t take a really nice raw material and process it beyond recognition.”